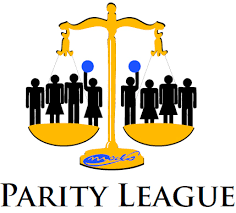 * All games are 1 hour long. Games are played to time not points.

Volunteer positions - Parity League has a league coordinator as well as a team manager for each team. The coordinator plays for free in the league. Each manager receives a significant discount to their player fee. For more information or if you would like to volunteer please contact Corey.

How are teams initially formed for the league?
When players sign up initially they indicate the highest level play they have experienced to date (e.g. touring or junior touring, A, B, C, D, E, F, G divisions, or new). Initially teams are balanced based on experience level so each team has a mix of very experienced to less experienced players.
How are teams rebalanced?
Once the season begins all players have statistics tracked throughout games. Players are assigned a ‘salary’ based on their accumulated stats. Teams will thus have a total salary based on the total for all players. Periodically teams will be assessed against a ‘salary cap’, and any team that is over will need to make trades for lower-salaried players to get back under the cap. This helps ensure that teams that have a number of strong players will need to trade some away to teams that are doing less well statistically, which over the course of the season helps keep all teams balanced.
How do trades work?
Each team will have a general manager (GM) who is responsible for making trades. GMs receive all statistics and salary calculations, so that when they are assessed under the salary cap, they are able to make trades that will keep them under cap. Teams may make additional trades (even where cap room is not a problem) as long as they are under cap at the end of trades.
How are statistics tracked? What are the statistics tracked? How is the salary calculated from these?
Statistics are tracked through a standard stat sheet all teams receive before games (and which are collected for entry following games). Any player on the sideline can enter stats on play as it occurs.
Statistics tracked are: goals, assists, Ds (i.e., passes defended by a player), throwaways, throws into D (i.e., throwing a pass that is defended), drops, and turnovers on stall count. In 2012 we added a ‘second assist’ category (i.e., the player who throws a pass to a teammate who then throws for a score gets the second assist).
Salary is calculated as: $100,000 + $5,000*(total of goals, assists, second assists and Ds) - $2,000*(total of throwaways, throws into D, drops, turnovers on stall count).
How does the salary cap work?
Team salaries are the total of all players on the team. To start, all players will have a salary of $100,000 so a team with 10 roster slots will have a starting salary of $1.0 million; this will increase as players accumulate stats.
At each trading period the salary cap is calculated. This is calculated as the average team salary (sum of all team salaries divided by number of teams), plus a ‘buffer’ of $25,000.
(In previous versions of the league the buffer was $50,000; the lower buffer will require more trades and get all teams in a narrower band for greater parity.)
Can I play regular Summer or Fall League and Parity League?
For the 2022 Fall Parity League there is no confilct with other programs.
While Parity Leagues typically run late in the evening, there is potential for conflict on nights when both Parity and Summer or Fall co-ed leagues run (particularly in Summer as slots run later).  If you have signed up for both Parity and co-ed league on the same night, you may need to leave early to make it to Parity for the start of the slot. Note late arrivals are treated as absences per the league attendance policy so DO NOT be late for games.
I’m going to be away a few games during the season. Will that be an issue?
Parity league structure is optimal when the same players show up each week, so interested players should sign up only if they are able to make all of the games. There is a league attendance policy covering treatment of absences.